Bring Back the Soul of America 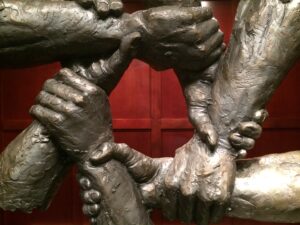 Did you here that? Durning the President’s speech this morning, there were several references to humanity, and a call to action to “Bring back the soul of America.” The politics of the speech, though relevant, were peripheral to its core message; the call for individual and collective healing. This presidential address—the vehicle on which the broader more expansive message of a call to action was launched—was not lost on me. Having recently published my book At-One-Ment: Reclaiming Our Humanity—a guidebook of straight talk, talk story, and action points addressing this very call to action—I was reminded how this book is the vehicle on which my prayer for humanity is carried into the world. Talk about Divine timing.

Our humanity didn’t go anywhere, it didn’t disappear, and we didn’t displace it; rather, at some point, we got distracted from honoring it at its core and nurturing it at the soul level.

Throughout human history, each dark age has been followed by a renaissance, a time of reinventing ourselves and the expression of our humanity. Our current situation and the unknown of what is yet to come are no exception. My thriving training had taught me that at such times as this, it served me well to reference one of my favorite default questions in any situation: “What is this all trying to show me, the seeing of which will change everything?” is question always pivots me in the direction of the answers that move me forward, li ing me out of feeling overwhelmed and stuck and raising me into the possibility that comes with change.

It is possible to position ourselves in alignment with thriving through this current dark age, which could, by Divine design, lead us to the next renaissance and new expression of our humanity. I invite you to consider the questions: “Who do we want to be on the other side of this, and who can we start being now to prepare ourselves to be ready and able to claim and sustain it when we get there?” From here, we are inspired to look at how we, as a collective humanity, can begin the process of unlearning what we have accepted as the truth of how the real world works.

There was a time not that long ago when people accepted as truth the belief that the Earth was at. And why not? ere was no reference to support thinking or believing otherwise … until there was. Today, though some still believe it to be at, this idea seems absurd to most. Yet when a at world is all you know, you don’t know to know something else. Had the Earth changed its shape when the new facts were introduced? Of course not. Did the old belief about the shape of our planet shift when the new thought, informed from a broader perspective, was introduced? Yes. It took a while, and a number of people were imprisoned and/or executed for challenging the old belief in the process, but over time, people would begin to teach the new thought, accept the new belief, and settle into the new truth.

If we have landed where we are today because of our chronic unconscious individual and collective thinking, then what would it take to consciously change our thoughts about who we think we are, redefine our potential, and be willing to tap into a version of ourselves not yet considered?

What if a belief in separateness, similar to a belief in a at world, had become our truth because it was what we were taught, what we learned, and the only thing we knew? And, what if our humanity, like the round Earth, had an unalterable truth and unbreakable connectedness? What if it were possible only for us to believe we are separate but impossible for us to be anything but connected? And what if, to course-correct our path, all we need to do is relearn our way back into alignment with the truth of our humanity, our At-One-Mement?