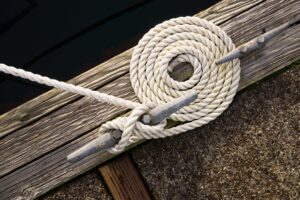 As the elephant grows in mass and accepts the perimeter within which its reality exists, it never occurs to the elephant to explore beyond the borders of this limited world he has come to know. With this training established (and self-managed by the elephant’s mind), the trainer never needs to change out the original rope for a stronger piece of rope or chain. Even though the adult elephant could now, with minimal effort, break free from what seems like a mere string compared to his massive size, because of his training and belief, a stronger length of restriction is not necessary. For it is the thoughts of the elephant, not the strength of the “string,” that keep him within the borders dictated by the training.

In this metaphor, we are like that baby elephant coming into the world full of potential. e rules, beliefs, and restrictions that are put upon us, and which we come to claim as our truth, are a string of beliefs tied at one end to our heart and at the other end to our perceived limitations. When first investigating the origins of our training, we are often met with “Because I said so,” or “ at’s the way it has always been,” or even more confusing, “I don’t know.” As we grow into adulthood, many of the thoughts, beliefs, and facts we inherited, though altered and watered down a bit, become the reality of the world we have created for ourselves and the borders behind which we live out our lives.

The thoughts we have about what is possible, as informed by the beliefs we have inherited and own (much like the string), are only as strong as the “truth” we give them. Consider, then, that a belief is a thought that has been thought, accepted, and believed long enough to be experienced as truth. Yet if a belief is learned through repetitive thought, might it also be unlearned and replaced with a repeated new thought? And if the new thought is thought long and o en enough, might it become a new belief, delivering us to a new truth, a new possibility, and a new world experience?