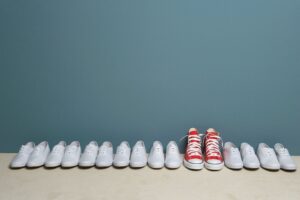 The Wizdom Of Oz

Like so many of us, I have loved the movie The Wizard of Oz since I was a child. It has been a source of entertainment and inspiration; it’s an example of the courage, heart, brains, and commitment required to face our deepest fears, remember our inner strength, and claim a life beyond what we believed possible. A journey on which, as Glinda the Good Witch instructed (pointing her magic wand toward the first steps along the Yellow Brick Road), it is always best to start at the beginning.

Long before the days of on-demand entertainment or even clunky VHS machines, we children would anxiously await the annual television broadcast of this classic film. Bathed and in our pajamas, we were ready to settle in for Dorothy’s magical adventure, our voices warmed up and ready to sing along with the iconic score, and our pillows on standby to cover our faces during the scary parts. It was truly an event. And if you were lucky, you were one of the households with a color TV, making Dorothy’s arrival in Munchkinland a glorious Technicolor transformation.I admit I was a total geek when it came to buying into the full-spectrum experience of Dorothy’s adventures in Oz: getting goose bumps with each song, every cell in my body chilled to the core in terror at the arrival of the Wicked Witch of the West. I never failed to generate tears of joy (mixed with an undertow of disappointment) at the end, when, having returned to her Kansas farm, Dorothy exclaims, “Oh, Auntie Em, there’s no place like home,” cueing the swelling of the music and the rolling of the final credits.

Always one to believe in the magic of possibility, for years, I was in total denial that Dorothy’s journey through Oz was a concussion-induced dream. Each year, I would watch as Dorothy took her magical adventure, hoping deep down she might take a different fork in the road and make a different choice when it came time to click her ruby slippers three times and head on home. Any disappointment on my part with Dorothy’s return to Kansas was in protest to her having surrendered her Technicolor dream world in order to return to the reality of her black-and-white world of the Midwest. In my child’s logic, I equated this “reality” to be a cop-out, void of imagination, lifeless, and without passion. Much like, as it would be made clear to me later on, how I related to the prospect of adulthood and growing up: a surrender to the loss of innocence and the dismissal of the magic of life. “Please, just drop a house on me now.”

In my child’s mind and heart, I wanted Dorothy to stay with her friends in the magnificent and colorful merry old land of Oz. Year after year, when the movie ended and I was tucked into bed for the night, I would spend what seemed like hours recommitting to the promise I had made with myself that if being an adult meant I had to surrender my over-the-rainbow childlike wonder, I wanted nothing to do with it. Adulting, as I witnessed it in the grown-ups around me, was a lot of hard work and not a lot of fun. Dorothy was stuck in her celluloid loop and destined to make the same choice for eternity. If she couldn’t rewrite her story, perhaps I could rewrite it for both of us by holding on to my childhood.

My metaphoric ruby heels dug in deep; I vowed to make it through the terrible teens with my inner child intact and unscathed. However, a parade of life happenings would derail my covenant, and I began to lose my way in the onslaught of complications, which are the normal and often traumatizing antithesis that comprise the course of adolescence. During my teen years, The Wizard of Oz was one of the fantasy worlds I visited to escape and block out the things that were too tough to bear, numbing myself in order to navigate my life without losing my mind. The other kids my age (and younger) were smoking, drinking, acting out sexual curiosity, and experimenting with drugs. Oz was my crack. It wasn’t until I was in my later teens, when my inner Dorothy, looking more and more like Bette Davis in Whatever Happened to Baby Jane, that I sucked it up, got “real,” and abandoned any hope of my more desired alternate ending to Dorothy’s adventure.

In 1989 The Wizard of Oz was rereleased in theaters in celebration of the movie’s fiftieth anniversary. I had never seen the film on a big screen and found myself settling into my seat with a rush of childlike anticipation, just as I had all those years ago. As soon as the overture started, I sat straight up, eyes welling with delight and a lump in my throat. And though I sang every song and recited most of the dialogue (apparently along with everyone else in the theater), it was as if I were seeing it for the first time. And in a way, I was. Having several dozen viewings under my belt, a now much-expanded library of life-enhancing self-development books (life-enhancing sounds like an upgrade of a couple of yellow bricks further along the self-development journey than self-help), and being well on my way along the path to changing my mind about my life, I had a very different listening of Dorothy’s adventures in Oz. This time, at the end of the film when Dorothy woke up back in Kansas, I was not disheartened but heart-filled. Dorothy’s whole life lay before her now because of her experiences in Oz and the wisdom she could now access.

This time, in final scene, when Dorothy learns she has always had the power to go home–all she had to do was click her heels three times, and she would be back in Kansas in an instant–and the Scarecrow asks Glinda why she didn’t tell Dorothy this before; to which Glinda calmly responds, “Because she wouldn’t have believed me. She had to find out for herself,”; made so much more sense to me. It’s not that we’re too dense or naive to understand; we’re just not yet ready to hear the answers and the guidance. We have not yet navigated our way to being in alignment with the clarity that clears the path to our potential. We have work to do to liberate ourselves from our training around thriving and to realign ourselves with the vibration of our potential. Dorothy had to get over it and stop blaming Miss Gulch in order to take down the Wicked Witch of the West, both of whom were manifested metaphorical representations of Dorothy’s internal dialogue and beliefs about herself. I, too, had internal work to do—course-correcting and training and rewiring beliefs I had about myself and my potential.

It took the events of Dorothy’s journey through Oz to reassemble the aspects of her character—her mental (brain), emotional (heart), intellectual (courage), physical (human), and spiritual (Divine) bodies—into alignment with the frequency of listening that was necessary for her to hear the wisdom and profound simplicity in Glinda’s guidance. Dorothy had always had the power within her to go home, to claim her mastery, to fully realize her highest potential. However, to do so in a sustainable way, she had to start from the beginning and retrain herself to be conscious and intentional with each step along her path, to be present and pay attention to the signs along the way, and to appreciate the opportunity to remember who she was as a powerful force—a tornado of creative potential. Dorothy’s adventures through Oz, much like her life in Kansas, didn’t happen to her; they happened for her.